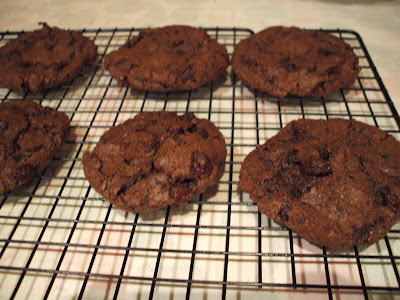 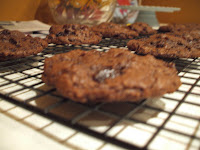 On Monday I made some superb cookies - Rye and Raisin. I found them on Dan Lepard's website, whilst trawling through the recipe's in search of mince pies.

Elsewhere on these pages, I have mulled over the importance of being in the right frame of mind to bake successfully.
So bearing in mind that I am a Tottenham supporter, and that they had beaten Wigan FC 9-1 the previous day, my temperance was most definitely good as I gathered my various utensils to start on the cookies. In fact, I was euphoric.

There were a few distinct reasons why these biscuits worked, I think: Firstly, I only put four patties of dough on each baking tray, rather than trying to save time and squeeze more on - which inevitably results in the cookies spreading into each other, and necessitates some stringent knife-action to remould them whilst they're cooling. I also didn't press the doughballs down on the tray, I just left them as little golf-ball sized blobs, so that they didn't flatten quite so much whilst cooking. Lastly, I ignored the recipe's instruction to remove after 12-15 minutes, and took them out at 10, despite the fact that they were still wobbling and appeared to be barely cooked.

The result was 16 perfect cookies - crisp on the outside, soft in the middle and exploding with raisins, which made them even chewier. I could have happily eaten five of them (but didn't)

The other smile-inducing event of the weekend was, at last, the ownership of the Ottolenghi cookbook - given to me by my brother as a belated birthday gift. It's cake-porn, pure and simple (the savoury stuff is, of course, unbelievable too). I'm struggling to decide what to attempt first, but there are some plum and marzipan muffins in there which made my heart quicken. I might send some to Aaron Lennon and Jermain Defoe as an early Christmas present.
Posted by Urban Cakes at 13:19 1 comment: 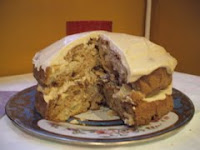 I was sitting in a coffee shop earlier this week with my work friend Jan (we were having a 'meeting'), discussing cake and the emotional connotations that it has. Whilst doing so, we were scoffing the leftovers from my birthday tea party which we had spirited into Cafe Nero, knowing full well that anything that they had to offer couldn't in any way compete with the sheer, moorish heaven of what I had produced. I know this might sound a little arrogant, but I consider myself nothing more than a vessel in which to carry forth the God-like baking genius of messr's Ottolenghi and Fearnley-Whittingstall.

I am not the first person to have blogged about Ottolenghi's Apple & Olive Oil cake - it has been reprinted and salivated over by many others. But never has a cake been more worthy of the adulation that it recieves. For a start, it was a joy to make - one of those occasions, when one feels really certain that the outcome will live up to its promise. The cake itself was almost panettone-like - so light, with huge shards of bramley apple piercing it's surface. And the maple syrup icing mixed up beautifully and spread on the cake in luscious perfection. The above photo barely does it justice (my 'cameraman' was absent that day). When I served it up on Sunday, there was literally no sound in the room for around 10 minutes, other than a kind of low gurgle of appreciation. And the leftovers were recieved at work with equal enthusiasm, as the last slice was fought over.

Hugh Fearnley-Whittingstall's Honey & Orange syrup cake is a more humble affair, but every bit as lovely - so clever in that you can literally taste every ingredient - the cloves, nutmeg, squash and of course the sweet yet citrus-y syrup that hits your tongue right at the end. It also improves with age, so by the time I took it into work, it was probably at the peak of its powers. One women came over and announced solemnly that it was 'the best cake I've ever eaten' (I'm not sure why she was so solemn - I like to think it was in reverance for my skill and generosity in sharing it!)

For the tea party, I also made my 'signature' light chocolate cake, and Dan Lepard's hazelnut brownies (again - I love those babies) - both delicious, though the brownies may have been left in the oven a tad too long, due to me being distracted by Strictly Come Dancing during the baking process.

I have realised that my favourite recipes generally have one common feature, irregardless of which one of my baking crushes has devised it: They all keep the sugar content to a minimum - not free (which would be horrid), but allowing the other ingredients to shine through.

Which brings me back to the coffee shop, and the overly sweet muffins and pastries that are generally on offer, certainly at the 'chains'. It was probably my dissatisfaction with these sickly treats that actually got me baking in the first place - a yearning for something with a bit of subtlety and finesse.

PS I will soon be adding all the recipes that I've mentioned so far in these postings, and apologies for not getting round to it yet.
Posted by Urban Cakes at 02:49 No comments: 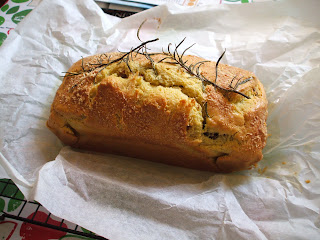 I always get a little frisson of excitement when confronted with a recipe that challenges the conformist view of what ingredient goes with what. At the moment, I'm salivating at the thought of baking Ottolenghi's Apple and Olive Oil Cake with maple syrup icing. Just typing out the words is enough to induce something akin to an orgasm. And Nigella's Rosemary Rememberance Cake is reported to be a joyous eating experience, though herbs in this context may appear a tad unsettling.

It's all a bit Willy Wonka, and that can only be a good thing in my book.
In much the same way, it seems like a strange contradiction that some of my most coherent baking musings happen whilst I'm at my thrice weekly Bikram Yoga classes. Clearly there is something about attempting a 360 degree backward bend in a room heated to sauna temperature, that induces a weird kind of clarity in my brain. I can calmly plan menus for tea-parties, create a shopping list, and even visualise my forthcoming cake-making session with extraordinary accuracy. I'm guessing that when Bikram Choudhury developed his ground-breaking yoga method in the misty hills above Calcutta, the ability to multi-task in this fashion whilst doing so, was not necessarily a priority for him. And I doubt that the class instructor will imagine that my beatific smile is less to do with finding inner peace than having a Eureka moment about where I might source some hemp flour.

Tomorrow, I'm going to make a stoned fruit and yoghurt cake with a whole plethora of plums that I have lying around - nothing remotely challenging in that combination admittedly, but it does include semolina which I've not tried before, and I love the sound of that. I'm saving the Ottolenghi cake till next weekend, when I'm having a little birthday soiree. I'm not sure what else I'll be preparing for the party - I'll wait till my next yoga class, and decide then.

PS. The snap is actually a Gruyere and Rosemary cake - another Ottolenghi recipe, and a rare savoury moment for me.
Posted by Urban Cakes at 06:04 No comments:

The icing on the (cup) cake. 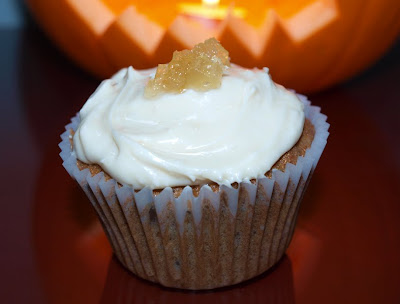 I'm quite aggrieved about Halloween. Why we're suddenly all expected to have parties and spend money on gratuitous Trick or Treat paraphernalia, I don't really know. But on the plus side it gave me a very credible excuse to make some heavenly Pumpkin and Ginger Cupcakes. This recipe appeared in last week's Guardian, and I'd been fantasising about baking them ever since. They didn't disappoint - in fact: Wow.

A word about butter-cream icing: After endless failed attempts and years of practice, I think I've finally found a formula that produces the right consistency for perfect frosting. Get your butter really soft, and beat it with half the icing sugar, using a wooden spoon, until you get a nice paste. Then add the extra's of your choice - mascarpone, cream- cheese, cocoa or whatever - give it another good beating, then add the remaining icing sugar and beat again. Put it in the fridge and remove about 20/30 mins before use.

So back to Halloween. After an early flurry of ghosts and ghoulies, all was quiet until about 9pm when there was a knock at the door. I opened it, and was greeted by a boy of around fourteen standing by himself, wearing an anorak and a pair of trackie bottoms. 'So where's your costume then?', I asked him. Nothing - just a slightly lethargic stare. I sent him away with no more than a snack pack of Sunny Maid raisins as a penance for his lamentable lack of effort, figuring that if he couldn't be bothered to even scowl at me in a threatening manner, he was unlikely to hurl any eggs at my window. I certainly wasn't going to honour him with a pumpkin cupcake.
Posted by Urban Cakes at 06:22 No comments: