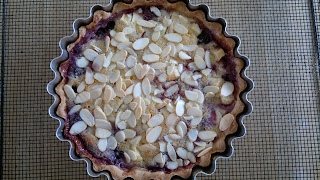 I've just come back from Thorpeness. Regular readers of this blog may recall that this is an annual and eagerly anticipated family holiday, and a great excuse to bake copiously for the fourteen people who attend each year. As usual I spent more time planning my baking schedule than packing, and upon arriving at the new house (where we haven't stayed before) headed for the kitchen to check out the facilities.

I was buoyed by the presence of a massive double oven, and imagined getting two or maybe three things on the go at once. How was I to know of the wiping of sweat and wringing of hands that would ensue?....
Saturday: Poppyseed coffee cake.
This was a recipe from the Guardian magazine a few weeks ago. I apologise for my naked bias towards that publications food columnists, but there is no doubt that I am singing from the same culinary hymn sheet as messrs Hugh, Yotam and Dan.
So the prep began with soaking the whole bag of poppy seeds in sour cream overnight, which for some intangible reason, thrilled me to my core. The recipe also required a hefty shot of double- espresso, which I proceeded to imbibe at regular intervals throughout the rest of the day causing a minor caffeine psychosis. Perhaps then, it was the eye-bulging, nail-biting, teeth-grinding effect of the coffee which contributed to my first diva-esque tantrum of the week; the cake didn't rise properly. It tasted nice enough, though oddly not as strongly of coffee as I'd have liked or expected. But the dense poppy seed mix gave the cake a lovely texture, and the assembled masses gave it a thumbs up. I wasn't happy though. Something wasn't right. 6/10
Sunday: Rye hazelnut brownies.
I've banged on enough about these brownies in previous posts, and feel no need to mention again how great they are, how utterly foolproof and, because they are prepared entirely in the pan, how they keep the washing up to a minimum too. The plan was to have them for pudding with some vanilla icecream and summer fruit salad. I've made them a million times, and was therefore horrified when I checked on them after the usual 20-odd minutes to find them overdone. No gooey centre (essential for a decent brownie), but a crumbly cakey texture.

It was when my friend Louise checked on the roast chickens a little later to find that the one on the left side of the oven was basting nicely, but the bird on the right looked like it had only just left the abattoir, that things starting shifting into place...we had a gas problem. Lunch was subsequently 3 and a half hours late, by which time no one really gave a toss whether the brownies had a perfect finish or not. And they did go brilliantly with the icecream and berries. But I wasn't happy. 5/10

Tuesday: Sour cherry and beetroot cake.
I've made this once before - for my friend Rachelle's birthday. It's a madly eccentric cake - topped with crumble and held together with a thick layer of cream whipped up with cherry jam. It shouldn't really work but it truly does. Or did. Having boiled the beetroot (I will always do things the hard way), grated it, prepared the crumble and put the two halves of vividly pink batter in their tins in the oven, I was dismayed to then discover that the one on the right had not risen. Not even a teeny bit. But it had cooked, so I was stuck with a bottom layer that resembled some sort of carmine tortilla. Or a raspberry naan bread. I did my best to repair the damage by adding a little cosmetic improvement, but as soon as it was sliced, the whole thing more or less fell apart.

The critics, however, were undeterred and raved about its flavour. One of them even went so far as to declare it one of their favourites ever. But by now my confidence was plummeting - this was not the perfect result that I'm accustomed to, and I was about to get extremely stroppy. 4/10.

Wednesday: Honey treacle loaf cake.
This was a recipe that appeared in Dan Lepard's column quite recently, and not making it was simply not an option. Rye flour, lemon icing and packed with a whole raft of spices? Bring it on. I have to say this was a joy to prepare - everything just smelt so damn good - and again, a lot of it involved merely melting the ingredients in a saucepan. So this time, I put the cake on the hotter left side of the oven, and hoped for the best. 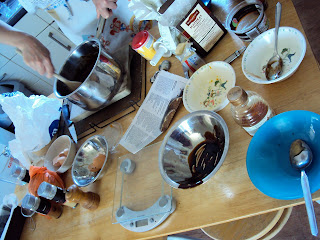 And at last, something went right. It was a truly yummy cake, with a real kick. But it was overdone - the edges were distinctly crusty, but I was relieved that it at least resembled a loaf, and the middle bit was a spicy, treacly delight. 7/10.

Thursday: Apple berry almond tart.
So this was my swan song for the week. And in the spirit of facing my demons all at once, I decided to attempt some shortcrust pastry. Rolling dough, dicky oven...what could possibly go wrong? But actually, five days in and I think I had at at last got the hang of the oven's strange idiosyncrasies. The tart - which is pretty much a bakewell, only nicer - came out really well. You can see it at the top of the page. I added some fresh blueberries to the base to give it an extra fruity dimension, and you can spot them straining for freedom through the frangipane. 8/10.
http://www.guardian.co.uk/lifeandstyle/2009/nov/07/apple-berry-almond-tart-dan-lepard
Contrary to appearances, I did - from time to time - escape the kitchen in order to wander down to the beach, stand at the very edge of the sea, which on that particular bit of coastline remains cold and grey even when the sun is shining, and daydream about my childhood, with my parents, and Paul and Joanna and our friends. And consider how lucky I am, despite everything.