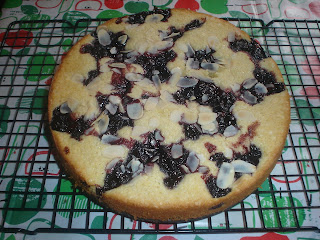 My family love making lists. Nothing is considered too obscure or mundane to fashion into a Top 10, given half the chance. Hours have been spent ruminating over our collective favourite comedy films, the 50 greatest singles from the 60's, Beatles love songs, iconic soap characters...Rainy afternoons are enlivened by intense debates about who would make it into our Ultimate Spurs Vl, and recently my sister and I were delighted to receive an email from our brother which took each of our family cats through the ages, and gave them a pop star alter-ego (eg Rusty - Captain Sensible, Tinker - Diana Ross. You get the drift).
So it seems only fitting to apply this slightly fanatical and undeniably nerdy principle to my baking. In time-honoured tradition, I've been mulling over this list for several days, so here it is: My Top 5 ingredients!

My favourite spice by a mile! There is barely a cake in my repertoire that doesn't benefit from a teaspoon of cinnamon, and it is the perfect companion for oranges, pears, sultanas, dates, honey...I could seriously go on and on. Its presence in banana bread and malt loaf is mandatory, and I should add that it's my preferred accompaniment for porridge as well. If a recipe includes cinnamon, I will almost certainly try it. It's a kite-mark for yumminess.

I know I've mentioned them before, but I'm passionate about figs. Fresh or dried, their sticky, natural sweetness can't help but thrill. And I know that some people struggle with their texture, but I absolutely adore it. Also, unlike other fruits, they are rarely seasonally inappropriate; they can work as happily in a tart for a picnic on a summer's day, as they do a traditional Christmas pudding. I will always consider purchasing anything with the word fig in it: lipsticks, sweaters, body lotion, candles - if it's the colour of fig, or mimics the smell I'll wear it, sniff it or slather it.

Of course, I laboured over this decision as I'm mad about nuts en masse. So I included almonds based on their extraordinary multi-tasking skills, and cunning ability to create lightness and moisture once ground and stirred into the batter. My healthy chocolate cake would not be half as nice without 80 grams of them mixed in with the rice flour and butternut squash. Shards of toasted almond flakes always look gorgeous scattered over the top of a cake and though adding a delicate flavour, never overpower. The cherry and polenta tart pictured above illustrates this rather well, I feel. And of course, almonds provide the basis for marzipan and this can only be a very good thing indeed.

Or pears or plums. Which I know is cheating, but it's hard to pick just one orchard fruit in preference to another. But apples just get the edge based on their unsurpassed greatness in a classic tatin or crumble. And they feature heavily in two of my all-time favourites - both to bake and eat, the rye apple cake and apple and olive oil cake - both of which I've eulogised over on these pages before. An apple in a recipe always provides comfort and a promise that all will probably go well. They are the friendly family GP of the fruit world.

There is surely nothing more uproariously enjoyable than stirring some decent dark chocolate in a pan and marveling as it begins to melt and take on that velvety sheen. Shove in some butter or cream, and it's enough to make you swoon. My wonderful, seminal rye brownies and heavenly ginger and treacle biscuits use tons of the stuff - chopped roughly in the latter. Not to mention countless muffins, layer cakes, cookies and most things which say fudge. And occasionally I experience what I can only describe as a proper craving for one singular square of Green & Blacks 70% on the bus home.

So here is a recipe which features #1, #2 and #4 on my all-time list. They're not pretty, they're not clever, but quick and delicious.

Just the job if you're feeling a bit listless. (Sorry).