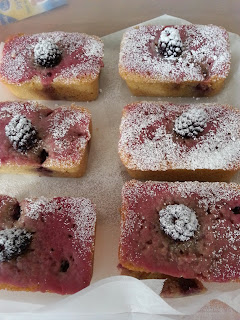 Not that I expect you've noticed, but I've been keeping a low profile of late.  I admit it.  I have had Baker's Fatigue.  My baking mojo detached itself, folded itself away and hid in the airing cupboard.  Luscious photographs of cakes and cookies, staring out at me lustfully from weekend newspapers, raised little more than a sleepy eyebrow.  Some sexy new piece of kit, purchased online, which would usually  have had me hiding behind the front door waiting for the postman, languished at the post office for days until I could summon enough enthusiasm to go and collect it.

I mean, I've been baking.  A lot, actually.  There were hot cross buns at Easter, a rye loaf and custard tarts for Mark's birthday, two bosom cakes (I know), a riot of maple-syrup based concoctions for Canada Day, more chocolate cakes, lemon drizzles, brownies and muffins than I can reasonably keep track of.  And a shed-load of Tahini flapjacks.

But I cannot deny that I have been experiencing something of a malaise.  There are two significant factors, I think.  Firstly, I am still grappling with my new oven.  Despite a fair bit of experimentation with tray-height, temperatures, putting the cakes in to the left or the right, and spinning them around mid-way through,  I really haven't nailed it, and some of my creations have suffered as a consequence.  It seems to be especially resistant to loaf cakes, which is a big problem and the cause of much anxiety.  Only yesterday, a banana bread seeped over the side of the tin, creating a weird sheet of banana-flavoured cake which looked rather like a map of the British Isles.  A shame that That's Life isn't still on, as I could have sent it in to Esther Rantzen.  I also think the weather has had a lot to do with my apathy; Don't get me wrong, having a proper English summer was an absolute joy.  But being stuck in a hot kitchen, while London sweltered in 30 degrees, was far from joyful.  On a few occasions, I was up at dawn in order to beat the onset of sunshine.  And let's face it - the desire to eat cake when it's humid and sticky is as resistible as having to make them.

On one especially sultry day, I was selling on a stall at a local community event, and had to watch helplessly as the top layer of my chocolate cake slid - in slow-motion- off the bottom layer, while the gorgeous summer fruits that had adorned it so prettily plopped onto the table.  It was just like that scene in Titanic, only I wasn't playing the violin.

And when the baking becomes a bit of a chore, writing about it does as well.

I was kind of wondering if it was going to become a chronic condition or whether the first glimpses of Autumn might brighten my mood, and send me back to the hand-mixer with renewed vigor.  But what actually did it in the end was a massive pile of freshly-picked, juicy blackberries.

Mark was in south Wales last weekend, and foraged a huge quantity of this most heavenly of berries from his mum's garden, delivering them to me in a giant plastic container.  They were already ripe, and I needed to use them quickly before they went too meh.

So yesterday afternoon I set to work, and in much the same way as those posh chefs always insist on cooking a piece of pork or whatever  '3 ways', I decided that it would be churlish to employ the fruit in only one dish.  I settled on a yummy apple, blackberry frangipane tart, topped with shaved almonds, and a simple apple and blackberry crumble, replacing half the flour with oats in the topping, adding some cinnamon and liberally sprinkling the fruit with lots of soft brown sugar so that it would go all caramel-y.

The 'third' option was some really moorish blackberry friands with star anise (I actually made these a few weeks ago for a family 'do', but I'm warming to the three-ways theme, so forgive me for the slight poetic license).  It was an Ottolenghi recipe from absolutely ages ago, and mainly came about because I had a ton of frozen egg-whites and was trawling the internet looking for ideas on how I could put them to good use.  The recipe requires 10, which would have created a lot of redundant yolks. The little treats were delicious - very light and moist - and the spike of star anise really bought something to the party.  It also gave me a good excuse to use my new mini-loaf tin, and although I may not have been literally cancelling appointments in order not to miss the delivery, I was nonetheless very happy to receive it.  The friands are pictured at the top of this post.

I've reprinted the recipe below, because having un-earthed it, it would be mean not to share the love.

Heat the oven to 170C/335F/gas mark 3. Use melted butter to brush the bottoms and sides of 10 mini loaf tins (4.5cm high x 9.5cm long x 6.5cm wide), or similar small baking tins, and chill. Put the egg whites in a large bowl and whisk to froth them up a bit; don't whip them completely. Sift the flour, icing sugar, ground almonds, star anise and salt, add to the egg whites and stir until incorporated. Add the lemon zest and melted butter, and mix just until the batter is smooth and uniform.
Pour into the baking tins, filling them two-thirds of the way up. Halve the blackberries and drop into the batter. Bake for 20-25 minutes, or until a skewer comes out clean. Remove from the oven, leave to cool a little, take out of the tins and leave until completely cool.
To ice the cakes, put the berries and water in a small bowl and use a fork to smash the fruit in the water. Pass through a fine sieve, pressing the pulp against the sides. Pour three-quarters of the purple juice over the icing sugar and whisk vigorously to a uniformly light-purple, runny paste. It should be just thick enough to allow you to brush it over the tops of the cakes, and will set as a thin, almost see-through coating on top with some icing dripping down the sides. (If not, add more juice.) Place a blackberry on each friand and dust with icing sugar.

So high-five for blackberries.   They really are a divine and underrated little fruit, and have made a tremendous contribution to my mojo bursting open the airing cupboard door and announcing to the world that I'm Back!  And after all...you've got to have friands*. 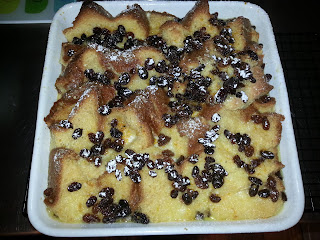