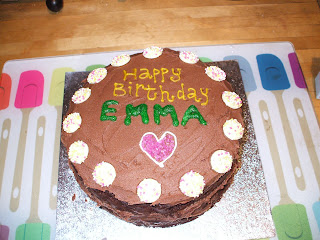 In the last few weeks I've been baking birthday cakes. For cash. And as much as I'm thrilled that anyone would want to pay me actual money for my efforts, I experience the most extreme anxiety when it comes to decorating.
The main event is so damn easy - I have made my 'light' cake many times now, and its never been anything but perfectly tasty, moist and moreish. The white chocolate version is slightly more labour intensive, but always equally delicious. They're the cake equivalent of Lennon and McCartney - one is rustic and homey, the other more complex and edgy but together they produce magic. (I really do apologise for these gratuitous analogy's that crop up every now and then. I have a terrible tendency to meander - even as I'm sitting here I'm trying to think of an excuse to mention Coronation Street)

But oh, the decorating...

The thing is, my vaguely Keith Haring-inspired naive style is fine for my kids and near relatives. They can see the humour in garish hearts, and spindly writing-icing typography - (think those fuzzy title credits for that old cartoon series Roobarb & Custard). It's all perfectly charming in an amateurish way. But I always feel like I have to raise the bar for my 'customers'. It's actually the anticipation that is most crippling - the certain knowledge that an accidental blob of metallic green goo, or badly centred greeting will not only look unsightly but will expose me as the fraud, the cuckold that I truly am. Poor Eli had the misfortune recently to wander into the kitchen whilst I was mid-flow, politely inquired if there was a bowl to lick, and was subjected to a torrent of expletives. He was rightly confused by the outburst.

Then just as I'm feeling marginally more secure, I'll go to a tea party where a Konditor and Cook cake is presented with a flourish, all perfectly beautiful duo-toned lettering, so pretty and inviting. Ho hum. I think my efforts are destined for one of my favourite websites Cake Wrecks (http://www.cakewrecks.blogspot.com/), which is a homage to gloriously badly decorated cakes everywhere.

Having said all that, I've had no complaints so far - perhaps my policy of loading on lots of summer fruit or white chocolate buttons disguises my aesthetic short-comings. And I have no such concerns for Caleb's cake which I'll be doing next week - in fact, I've got a little pot of sparkly burgundy fondant and a teeny-tiny paint brush that I haven't attempted to use yet. The poor boy doesn't know what I have in store for him (and come to think of it, neither do I).