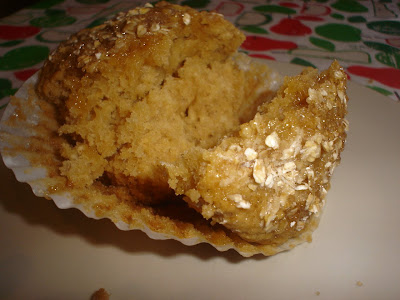 The last couple of weeks have been all about muffins.

As previously mentioned, I'm preoccupied with the creation of the Perfect Muffin, and consider a successful batch to be something worth bragging about.

The recipe's that I've been experimenting with lately have all been from a book entitled Mad About Muffins - a dreadful, forcibly jolly title, entirely lacking in aspiration, that I don't approve of at all. For some reason that I can't explain it makes me think of Prozac. But I must concede that its author - one Diana Bonaparte - definitely knows a thing or two about the subject.

Over the years, there are various techniques that I have learnt are essential where muffins are concerned; the batter must not be over-mixed, the use of an electric mixer is probably not a good idea and the butter (if it's being used, sunflower oil will often suffice) is usually better off melted. A light, airy sponge is actually not desirable as a good muffin should be a little heavier and even somewhat lumpy.

So the first recipe that I used from the book was Peanut butter, banana and chocolate - these were just OK - I thought the dollop of smooth peanut butter in the middle would be inspired, but actually it just meant that the roof of one's mouth became coated with it, overwhelming the palate and making the identity of the more subtle flavours hard to fathom. I was hoping that they would provide some much-needed comfort following England's humiliating exit from the World Cup, but they didn't quite live up to this mammoth task (in fairness, no cake would). Having said that, I very much approved of the addition of 20grams of wholemeal flour (many of the recipes suggest this).

I then moved onto Blackberry and white chocolate, and these were a triumph. As I'm writing, I am relieving the sensuous pleasure of pulling one apart and observing the fruit exploding ghoulishly. Were it not for the school summer fete looming large on the horizon, I would have personally eaten about a dozen of them, instead of offering them up for the cake stall (I did however, resist buying them back as I did with the rye brownies at Christmas!)

And earlier this week, I interrupted a birthday cake commission to knock out two of the recipes: Golden syrup and oat (don't be fooled by the oat thing - yes, they were in there, but this was effectively a syrup sponge in muffin form. Not that I have a problem with this) and Cinnamon, sugar and banana. Both of these had some nice little added nuances - the former was brushed with warmed golden syrup once they came out the oven, which produced a sweet, sticky glaze (pictured), and the latter was topped with a sort of crumble of unrefined sugar, butter and Cinnamon which added a pleasing, unexpected crunch once bitten.

A word about bananas: I hadn't realised until quite recently how important it is to use very ripe, or even over-ripe bananas in one's baking. For this weeks muffin extravaganza, the skin of the fruit I used was literally black, and the flavour was just great. If perky yellow bananas are used, be prepared to taste the potassium - good to know that such a life-enriching mineral is present in one's creations, but being able to identify it is not so fabulous.

Overall, most of these recipes worked really well, and there are many more on my To Do list. I think I'll try the Orange and almond to take to friends in Hove next weekend (it was Karen who gave me the book, so it seems only fair). They have made up for some disappointing muffin excursions in recent months, the most notable of these being the Plum and marzipan from Ottolenghi's book. They sounded so exciting, but just didn't quite live up to their promise. Though I don't think that any have quite rivalled his Carrot, apple and pecan that I made for Caleb's birthday. They continue to provide the benchmark by which all subsequent muffins should be measured.

So anyway, here's one of the recipe's. Enjoy. I took the last one of these to the cinema with me yesterday and ate it with a coffee shop cappuccino in preference to a bag of popcorn!

For the filling:
10 tsp golden syrup

My batch lasted for 4 days in an airtight container.
Posted by Urban Cakes at 13:19 No comments: