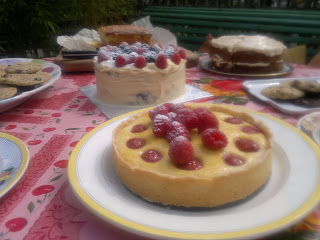 I've just attended a pastry course at the Cookery School in the West End. I have, on other posts, alluded to my fear of pastry. Despite several attempts - and some have been quite successful (those heavenly little lemon and poppy seed tartlets for example) - there is something worrying about a process that relies so heavily on the elements surrounding it; the heat of the palms of one's hands, the temperature of the water, the quantity of flour to put down on the surface to stop the dough from sticking (too much and it will impair the flavour.) I could go on and on. And yet, my appreciation of a perfectly turned-out pastry case has propelled me to try it again and again.

So when my friend Rachelle bought me a voucher for a couple of courses as an incredibly thoughtful gift, my choices were immediate: pastry and bread - my two nemeses. When I arrived and clocked our teacher for the evening, I started feeling a wee bit giddy. I noticed that his name - displayed on a badge on his chefs' whites - was Ghalid, and I immediately thought of Ottolenghi and his renowned pastry chef...Ghalid Assyb. A man who actually has a chocolate and chestnut bar named after him. For me, this was like signing up for guitar lessons and discovering that your tutor is Jimi Hendrix. Yes, it's THAT BIG.

At first Ghalid seemed genuinely chuffed at having such an admiring student on his course that evening. However, when I started excitedly reciting his recipe's back to him verbatim I could have sworn that I saw him backing away ever so slightly, and what could conceivably be described as a look of fear passed across his features. Still, I was enjoying being the nerdiest girl in the class - shooting my hand up at every available opportunity and relishing the moment when he instructed the other students to observe my rolling technique. Frankly, with my academic record this was an entirely new experience. In my youth, I was more often to be found behind the toilets puffing on a No.6, while trying unsuccessfully to pluck the eyebrows of my best friend Abigail with my spare hand, than sitting in class trying to impress the teachers.
And the course didn't disappoint either. We all got a fantastic amount of one-to-one supervision (OK, there were only three of us) and a front-row view of Ghalid and his quite astonishing pastry skills. Hell, he just made it look so easy: choux paste was effortlessly beaten, puff was rolled into perfect buttery rectangles, shortcrust was draped delicately over pie dishes and pinched daintily atop the most heavenly looking Cornish pasties. And we all had a go, and were amazed by the positive results.

I left with a box containing some of the wares I helped produce, including an apple pie which me and the kids ate the following evening with lashings of whipped cream.

We also each had a sizeable square of our own unused puff to take home. So a few days later, I had a go at my own cheese straws - made with Gruyere and caraway seeds - and lovely, delicate palmiers. I also wanted to make something else with sweet pastry, so chose another one of Ghalid's masterpieces from the Ottolenghi book - a raspberry and semolina tart. All of these are pictured. 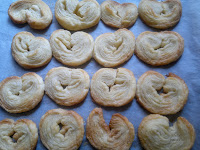 While working, I realised - slightly depressingly - how the shortcomings in my kitchen affect the outcome of my pastry attempts. The slippery stainless steel surfaces at the Cookery School aided the process and made it so much more effortless. It was positively enjoyable to roll out the dough, unlike the laborious task that befalls me at home, where toasters, kettles, bread bins and a whole array of other kitchen detritus impair the activity unless they're removed - which is hardly practical. And wooden worktops - though high on rustic charm - are pretty rubbish for anything other than chopping vegetables. I may well have to do something about this.

So I've got the bread course next week and once again, I believe that it's with my baking mentor. Be afraid, Ghalid. Be very afraid.... 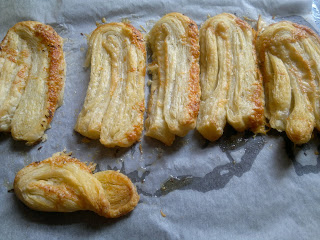