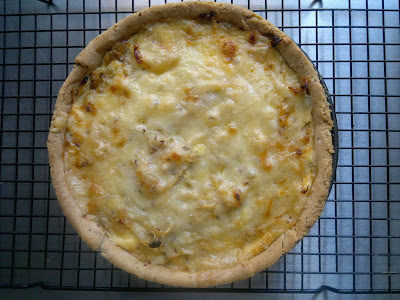 Before I commence with this post - which is concerned with my new-found passion for savoury bakes - I must add a brief addendum to my last blog entry; I seem to remember discussing with great confidence my macaroon adventure at Leith's Cookery School. I even posted a photo of several healthy-looking pastel-hued meringue discs laid neatly upon a tray to illustrate it. I might have been ever so slightly smug about it.

Well, to the right here you will see what happened when I attempted to make them at home. A catastrophe. So much went wrong that it is barely worth raking over the details. And thankfully, enough time has elapsed now for me to no longer reach for the Prozac at the memory of it. Suffice to say though: Never try and judge the temperature of a 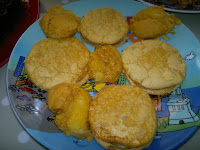 sugar syrup for use in an Italian meringue by staring at it and waving your hand over the pan to see how hot it feels - you need the necessary equipment; don't mix the almond and egg-white for around half the allotted time that you were CATEGORICALLY told it would take to get it right. And don't try and squeeze the macaroon mixture out onto the tray through a piping bag with a nozzle that an emaciated ant would struggle to crawl through.

There is a lesson in here somewhere, though. Learned the hard way, but learned nonetheless: Stick to what you're good at. Know your style, and be true to yourself. If not in life, at the very least when you're making cakes.

Which brings me back - with a huge sigh of relief - to muffins and tarts.

The words Savoury and Cake, when fused together, produce something of an oxymoron in my mind. I've experimented with the concept quite often with varying results; Ottolenghi's Gruyere and Rosemary loaf cake was delicious, though I'd almost put it in the bread category, as it worked best with a dollop of butter. I tried a few savoury muffins from my go-to muffin recipe book for the Christmas Oakstock market in Harlesden that I sell at once a month. They sounded great on paper - Brie, red onion and fig, and pear, date and Stilton, but were less successful than expected, and a bit stodgy. In theory, muffin batter is a great enabler for most fillings and toppings, but getting the balance right is still a challenge. I can state here and now that I will never be labouring over a smoked mackerel, courgette, tomato, olive and basil muffin as recommended in one recipe book. Uh-uh. No way.

And as for savoury cakes. One of my favourite people in the world, Hugh Fearnley-Whittingstall devoted a whole Guardian column a few months back, to the joy of them, but I remain unconvinced. There is something not quite right about a 20cm round cake with bits of pepper and tomato in it. For me, you see something shaped like a cake and you expect to eat something that tastes like a cake as well . I'm all for a bit of experimentation, and regularly use butternut squash, beetroot and various other root veg in my baking, but that is much more a textural thing, plus the obvious advantage of reducing the calorie count. I just don't like any kind of food that talks in riddles. (The whole concept of molecular cooking is revolting to me. I would rather eat an apple, than a green shiny orb that has been conjured up in some kind of kitchen laboratory to taste like an apple. What in God's name is the point of that?)

Last month I was selling at a private view for an art show in Willesden (www.harlesdengallery.co.uk). Gabriel, who runs the gallery, suggested that as most of the attendees would be arriving straight from work, it might be worth having something more supper-like on offer to satiate their early evening hunger. So with this in mind, I pulled out a few ideas that I thought would fit the bill - carrot, spinach and cumin muffins, a Gruyere and onion tart with a caraway seed crust (pictured above) and some courgette and Mozzarella frittata-style muffins (all in addition to the usual chocolate cakes, brownies etc. I'm not that fickle)

They were great fun to make, though the endless peeling, chopping and sauteing of various vegetables was more like preparing dinner for the kids and was quite knackering. But the smells emanating from the oven were glorious, and the results were absolutely yummy. The response was great too - lots to think about when I finally get around to getting my regular pitch organised. I would add to this burgeoning repertoire the spicy blackened corn and polenta muffins that I make quite often - an Ottolenghi recipe again, and really special.

It's a weird one, this. I'm not a confident cook, and have always made a rather mercenary point of ensuring that I share my home with someone who would feed me well - be it boyfriends, roomies or lodgers (one of them probably over-stayed his welcome by about a year, due to his astonishingly good spaghetti vongole). So when I venture out of my comfort zone, I pay slavish attention to whichever recipe I'm using having little confidence in my own ability to judge the balance of flavours by instinct. But somehow incorporating main-course ingredients into my baking doesn't make it seem nearly so scary, and frankly I'm feeling rather inspired. I'm perving over as many interesting meat and veg combo's these days, as I am nuts and chocolate.

So easy too. Here's those carrot, spinach and cumin muffins:
http://www.guardian.co.uk/lifeandstyle/2010/jun/05/savoury-muffin-recipes-fearnley-whittingstall

It's probably just a phase though, because licking the bowl is nowhere near the rewarding experience that it is when there's butter, sugar and vanilla involved...
Posted by Urban Cakes at 08:22 1 comment: