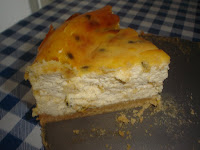 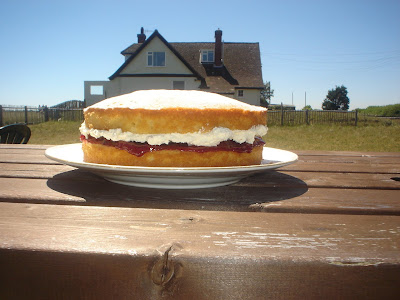 I've just come back from a week in Thorpeness. It's an annual thing which has been going on since I was a baby, and it is truly my favourite place in the whole world. It is my plan to retire there someday - I will potter around my garden, bake homely cakes in a big unfitted country kitchen and stare at the sea at dusk from a rocking chair set at the window. (Actually this makes me sound like Grandma Walton, so I might need to re-think.)
Of course, baking in this environment is always hugely enjoyable. Apart from anything, there are about 18 of us who go each year, so I don't have the problem of eating too much of it myself. I'm lucky if half a slice actually passes my lips. (Don't imagine for a moment though that I don't make up for it in other ways, with the local fish & chips, Sunday dinners and barbecue's. I'm always half a stone heavier by the time I get back)
I always plan in advance what I'm going to make, so that I can pack the right cake tins, and any speciality ingredients that I might not be able to get hold of in the local Co-op. I also take my measuring spoons, digital scales, favourite spatula and for the first time this year, my electric hand-mixer. I seem to spend more time on this than actually packing clothes or anything else remotely useful.
The house which we usually stay in was being refurbed this year, which was a shame because its huge, bonkers kitchen plays host to some of the most extraordinary baking paraphernalia I've ever come across - I think most of it was purchased in the 1940's and 50's and indeed some of them seem to still bear the stains of grease and lard from that era too. Super-sized cast-iron bun-trays and loaf tins clearly designed to make industrial-sized batches of bread practically fall out of the cupboards as you open them.

Our house this year, though boasting more mod-cons than our usual, had a lamentable lack of utensils, and I found myself doing most of my mixing in a fruit bowl.
However, this didn't dampen my enthusiasm as there is something utterly inspiring and wonderful and magical about going about one's business in the kitchen whilst the sound of the sea can clearly be heard from the french windows.

In addition to a few fail-safe recipe's that I felt would fit the mood of the place - the Butternut squash cake with orange and honey drizzle, and those perennial Rye brownies - I thought I'd try my hand at an absolutely classic Victoria sponge, and a cheesecake this year.
I've never actually made a cheesecake before, which is odd because I adore a good one and frequently order it in restaurants. Plus of course, there's the ethnic thing: I remember vividly trips to Reubens delicatessen on George Street when I was child and that dense, lemon-y, texture of a slice with that almost rubbery glaze on top. Yum. Perhaps it was this memory which cowed me. I also have many friends who make divine cheesecake, so I've never really felt that there was a gap in the market.

But there was something about Dan Lepards recipe which inspired me - perhaps it was the addition of passion-fruit and the fact that it was baked and not chilled. It appeared to be one of those recipes with distinct stages, and I love the challenge of those. So I started with the base by pushing a basic crumble mixture into the bottom of the tin and sticking it in the oven for 20 minutes or so. Then the really fun bit, which was creating the passion-fruit and orange curd - after several minutes in the pan this watery amber-coloured mixture looked quite unpromising, but just as I was about to give up on it, it bubbled into a creamy, fruity, gloopy sauce which I could have quite happily eaten by itself, straight from the saucepan. I also loved the fact that I was instructed to remove and then replace the passion-fruit seeds - I actually have no idea why this benefited the outcome, but it was such a ridiculously but enjoyably anal activity that I didn't for a moment question its importance. The cake was honestly delicious. We had it for tea that afternoon unchilled, and therefore still soft and a bit wobbly. Though it was still great the next day after spending the night in the fridge. I only remembered at the last moment to take a quick picture of it, and it barely does it justice - the whole thing was so handsome.
www.danlepard.com/recipes/2010/05/passion-fruit-cheesecake/
On our last day, I made the Victoria sponge. I virtually cut my teeth on basic sponge cakes, and my older son always preferred them as his birthday cakes, so I've baked many over the years. But I couldn't resist the recipe which appeared in the Guardian recently in Hugh Fearnley Whittingstall's pages, though he acknowledges that its based on Mrs Beeton's classic version. The most liberating thing about this was the measuring; Weigh 4 eggs and match this exactly with the amounts of flour, sugar and butter. It was 230g in this case. How clever is that? I shall always use this method to make sponge cake in the future. The other element that added greatly to the success of this endeavor was the suggestion that a couple of table-spoons of milk should be added if the batter didn't fall quite easily off the spoon once mixed. Again, so incredibly simple but it made a huge difference ensuring that the cake was light, airy and exactly as it should be. Filled to the brim with some decent raspberry jam and lashings of whipped cream it was the ultimate teatime treat and the perfect way to end our week in my paradise.
www.guardian.co.uk/.../victoria-sandwich-recipes-hugh-fearnley-whittingstall/