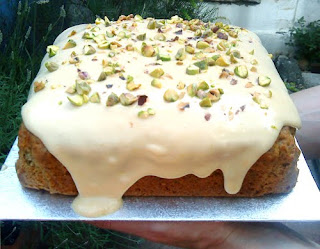 I'm bricking it. After months of blathering on about my intention to make a business of my cake obsession, I'm finally being forced to do something about it.
Encouraged by my friend Jan, and emboldened by the consistently favourable response to my last few offerings, I contacted the Portobello Film Festival http://www.portobellofilmfestival.com to see if it would be possible to set up a stall at their launch party in September. The festival director's enthusiastic and unhesitating "er..OK then", has made it necessary for me to consider all the practicalities of baking on a grander scale than I've ever attempted before, not to mention the vexing question of what and when to prepare it. I am also having to turn my thoughts to the acquisition of a trestle table and enough stands, trays and other motley paraphernalia required to make it all look half presentable.

I'm sure it will be a worthwhile experiment though. I've long been intending to test my capacity beyond the usual tea parties. And they can be stressful enough.
So on my way to the office this morning, I pressed my nose up against the shop window of Ottolenghi in Kensington. In fact, this is a daily ritual and the staff tend to regard me as they would a rather tiresome stray cat who hovers meaningfully around the door in the hope that some scraps might be thrown their way. But the manner in which they present their patisserie is beautiful, and a good (if not somewhat lofty) yardstick as to what works visually.

I'm thinking that a reasonable amount of chocolaty treats should be on offer; some brownies, and my light chocolate cake smothered in raspberries. And something slicked in gooey pale icing - the apple and olive oil cake perhaps, carrot cake or that wonderful coffee and mascarpone cream delight that I used to do a lot. Some cookies - easy to consume on the go, and as it's my current obsession, I won't be able to allow the event to pass without some crowd-pleasing muffins. Bursts of vivid colour are essential to a mouth-watering display, most effectively provided by arrangements of summer fruit sitting atop the cakes, or perhaps constrained by caramel on an upside down tart.

I adamantly refuse to acknowledge the cupcake craze. I hate those little buggers, and no amount of sickly Krazy-color frosting will persuade me otherwise. The same can be said for macaroons and whoopie pies; A baked good is no place for a fashion fad, it's just not dignified. Sarah Jessica Parker endorsing the Krispy Kreme donut was enough to ensure that I would never allow one to pass my lips.
But I digress. I might be tempted to include some of the more esoteric recipes that I've tried lately - the Tahini flapjacks that I made last weekend were yummy, as was the date cake with a tamarind drizzle. The coffee, ginger and pistachio cake pictured above was no slouch either. I'm guessing that the festival patrons will be a reasonably discerning bunch, and will expect something more sophisticated than a few iced yum-yums. And if not, they'll be too drunk to notice, anyway.

I also made some cookies on Monday for my God-daughter Claudia who has just given birth to her second baby. Based on the certain fact that for the foreseeable future she will only have the use of one arm (due to the permanent carrying and feeding duty of the other), I scoured the net for a recipe that would provide something vaguely nutritious in a low-maintenance bite-sized format. I was not remotely surprised that the winning formula was found on Dan Lepards site (I know I know, but he's the gift that keeps on giving) - his one-a-day cookies, which appeared in the Guardian a few years ago, were little nuggets of goodness, packed with wholemeal flour, seeds and grated apple (and butter and sugar, of course - how could it call itself a cookie otherwise?), and they fulfilled the job nicely. http://www.danlepard.com/forum/viewtopic.php?p=11784&sid=32dbeeda625aca05cae6bb80c92f44dc In the recipe Dan mentions that he got 12-14 biscuits out of the dough, but I managed around 20 - reducing the calorific value considerably!
So I'm off on holiday next week, and no more baking till I'm back. I'm approximately five days away from wearing a bikini and it's keeping me awake at night. But upon my return, I'll be planning my first commercial spread, and may even have to treat myself to an Ottolenghi purchase instead of just gazing at it. For research purposes, obviously.