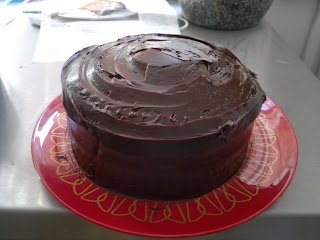 One Christmas, when I was about 11, my fabulously eccentric German grandmother gave me a present which I'll never forget. For all the wrong reasons. It was Bill Maynard's autobiography, Yus my Dear (his catchphrase apparently.) To this day, I'm perplexed as to why she thought that I'd appreciate it, but I kept it of course, and every now and then would spot it on the bookshelf and experience once again, that same sense of wonder. Of all the books in all the world, why had she bought me the memoir of a third-rate comedian, whose minor TV shows I had never actually seen?

I experience a similar feeling these days, when I taste a chocolate cake with a dry sponge. I just don't understand it. I fail to see how a recipe wasn't tweaked, the balance of ingredients altered, the batter experimented with, until moistness was achieved. There really is no excuse for it.

In the last few weeks, I've made tons of chocolate cakes. One to sell at the Portobello Film Festival, another for the Oakstock Market, one for my neighbour for painting a wall, a birthday cake for the gorgeous and hugely appreciative 4-year- old Arthur, and several more besides. This was my light chocolate cake, the one that never fails to rise, the one that I can knock out in an hour or two and which always garners the highest praise. The one that is unfailingly MOIST. So by the time my nephew Stefan's big day came around, I was a little bored of it, and fancied a change. I've lost enthusiasm for the square cake that I talked about in my last post. Even though, with its liberal girth, it's fantastically practical for decorating purposes, flavour-wise it doesn't knock my socks off. So once again, it was Dan Lepard who provided the divine inspiration with his sour cream chocolate cake. For starters, those two words Sour and Cream will always make me a little misty-eyed. I love the stuff - I've used it copiously in cheesecakes and icing, and soaked poppy seeds in it overnight to use as the basis for a coffee cake. I love that it tastes delicate, slightly off-kilter and yet its as indulgent as the double variety. When I saw the recipe in the Guardian a few weeks ago, there was no possibility of not giving it a go.

It was a joy to bake as well, everything mixing together just so. And the glossy ganache-like icing was - well, the icing on the cake I guess. It's pictured at the top of this page, and in all its moist glory on the right here. Despite the fact that many of the posher recipe books recommend 70%- and- over cocoa solids in 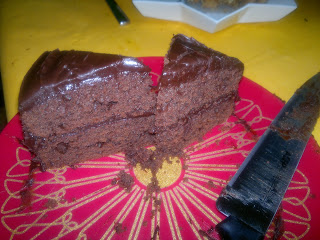 the chocolate used, I dispute this. I prefer Sainsbury's own- brand fairtrade variety, which is around 52% and does the job just as well, if not better - I nearly always use it in my brownies and chocolate frosting, and may only concede that a higher cocoa volume be necessary if I'm making a torte, where the sheer amount of chocolate required makes the finished result more susceptible to the scrutiny of one's taste-buds.

My cousin Xanthe made a sensational cake last weekend for her son's birthday. Apart from the fact that it was shaped like a number 9, and she had somehow managed to weld it on to the surface of one of his footie shirts (genius), it tasted great, and was wonderfully moist. She had used an American cupcake recipe and was extolling the considerable virtue of buttermilk as an ingredient in chocolate cake. I absolutely concur with her here - it appears in both my favourite recipes, and makes a massive difference to the texture, as well as diluting any surfeit of sweetness.

I'm not a great one for short cuts; I usually prefer to take the more labour intensive route with virtually everything I do, if only to moan about it afterwards (yes, it's my Jewish genes rearing up once again). And nothing horrifies me more than when a TV 'chef' rolls out some shop-bought puff pastry with the cheeky assertion that it 'tastes just as good as if you do it yourself'. Pah to that! But I do admit that melting chocolate and butter in the pan really is a perfectly acceptable alternative to putting them in a bowl over barely boiling water. Unless it's white chocolate, in which case don't even go there: the bowl and steam routine has to occur for that (something to do with the added sugar, I'm guessing, but I'll leave the science bit to someone else who knows or cares.)

So if you can feel a chocolate cake coming on, I'd absolutely give this one a whirl. Delicious. And delightfully moist. Or tell me it's your birthday, and I'll rustle one up for you myself.
www.guardian.co.uk/lifeandstyle/.../sour-cream-chocolate-cake-recip...
Posted by Urban Cakes at 12:35 3 comments: