Let the bread rule your head 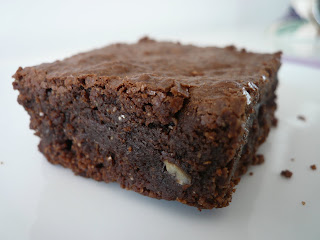 I've had a very busy baking month, in which I have (amongst other things): sold cakes and cookies at a community event in Harlesden; made a commissioned birthday cake on which I had to replicate a Picasso-esque illustration of a man with two heads, using a sheet of marzipan and some writing icing; baked the most perfect carrot cake I've ever tasted, let alone had a hand in myself; upgraded my kitchen to include a new shiny stainless steel work surface, and a whole array of spice jar- sized shelves (thanks to Wyn); found a new, very evil chocolate cake recipe which I've been fine-tuning, and attended my second course, this time on bread making.

Once again, the tutor for the morning was Ghalid Assyb, my baking mentor. I admit that I sauntered into the demo kitchen rather over-confidently and had to stop myself from high-fiving Ghalid, or worse - air kissing him on both cheeks. But I wanted the other students to be under no doubt that I was his star-pupil - an artisan pastry-maker - and someone who had remained in contact with him on a regular basis by email and text. Yes, that's right. The poor man has been politely answering my endless questions, responding appropriately to random photographs of brownie batter that I've sent him and in a slightly desperate tone - acknowledging a picture of a semolina tart - exclaimed, 'Yes, that looks great, but I'm in Morocco!' Rock stars get knickers thrown at them. Ghalid gets fuzzy cake pictures.

So back to the course. 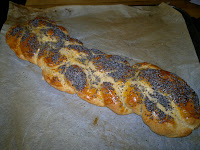 It was wonderful, again. Light bulbs were flickering above my head every few minutes, as yet another revelatory tip was imparted; using dried yeast and not the quick sachet variety, keeping the mixture wet and sticky until the later stages of kneading, and my favourite - putting the dough in a barely warm oven - around 40C - to rise. Brilliantly effective. We were given the choice of making a classic granary loaf, cinnamon buns, foccacia or a chollah. I of course went for the last option, deciding that not to play the ethnic card would be churlish. And anyway, I LOVE chollah. The loaf that was made in class was perfection - big glossy knots of chewy, slightly sweet white bread.

We were given our barely risen dough to take home to finish, and it was here that I managed to bugger it up. Losing focus and rushing the process are no-no's, and I did both. I blame University Challenge. You try plaiting strips of wet dough, while attempting to identify portraits of late 18th century philosophers (just say Kant repeatedly, and eventually you'll be right.) As a Facebook pal pointed out, it looked more like a loofah than a chollah (it's pictured above - bless). I also managed to ruin the cinnamon buns that I tried out a few days later - multi-tasking doesn't really work with yeast-based products. I got up at the crack of dawn, measured out the ingredients with eyes barely open, shoved the wet ingredients into the dry ones far too quickly, kneaded the sloppy mixture which covered my hands in a gloopy grey mush, and slapped a load more flour into it in an attempt to dry it out a little. I of course realised it wouldn't work but covered it and put it in the oven to rise anyway, then left the house for a morning run, hoping that when I returned the power 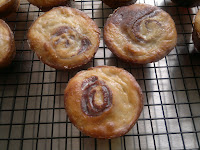 of positive thought would have helped to transform it into something quite presentable. It hadn't. I doggedly continued though, fashioning the little buns and finishing with a slick of cream cheese and caster sugar brushed on whilst hot, as suggested by Ghalid. I actually thought they tasted quite nice, though there wasn't anything terribly bun-like about them. They were more like little tea cakes, as you will see in the snap. Oddly enough, considering how I usually chastise myself for baking failures, I didn't really mind too much on either of these occasions. The reason for my lack of success was obvious and will be easily remedied: more time, less hurry. It's when I can't quite figure out the problem that I become vexed.

My other significant baking event this month was adding a new chocolate cake to my repertoire. In order to pull off the Picasso moment, I needed something with a nice wide flat surface, and an icing that wasn't too fancy. So I scoured the internet and came up with this one. It is almost embarrassingly simple.