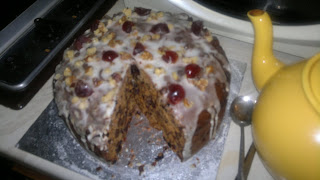 So Christmas came and went in a haze of icing sugar, dried fruit and mixed spices. It's an odd one, that. Are we all pre-conditioned to start craving strange seasonal anomaly's the moment the clock strikes midnight on December 1st? Is our sudden desire to add handfuls of cloves and grated ginger to everything some primal response to the certain knowledge that at some point in the ensuing weeks we will catch a cold? Or is it merely a sinister marketing ploy by the likes of Starbucks to ensure that our custom remains constant as long as the aroma of a gingerbread latte wafts forth every time we pass their door?
Whatever the reason, I embrace the inclusion of festive ingredients very happily indeed.

So I began my countdown - unremarkably - with a Christmas cake (pictured above). This was another wonderful Dan Lepard recipe which distinguished itself by using as its base a creamy caramel, and was, as you'd expect, packed with tons of fruit and nuts (though I actually forgot to add the walnuts due to a sudden violent eruption between my sons in the room next door which required immediate attention. This despite the fact that the nuts were sitting , weighed and chopped, blinking at me on the kitchen counter.) I iced the cake with a cardamom infused lemon drizzle, and decorated it with leftover glacier cherries and those discarded walnuts. It was really good, though also the heaviest cake I've ever made - it must've weighed half a stone. My arm literally ached from carrying it!
http://www.danlepard.com/front-carousel/2010/11/3017/caramel-christmas-cake/

The build-up to Christmas is universally stressful, but my month was further complicated by Eli's 9th birthday and his insistence that we have a family tea party to celebrate it (this is something that I've always managed to swerve, based on its proximity to December 25th). So I gamely set about concocting a menu which would honour the occasion but with a seasonal twist. Thus, little stem ginger macaroons spiked with almonds and dusted with icing sugar were produced, as well as those marzipan, cinnamon and plum muffins which I tried last year (but worked much better this time around), and also from Otto

lenghi the most decadent chocolate fig bars ever which elevated the simple tray bake to a new and exciting level (pictured on the right). I also knocked out that seminal apple loaf again (any excuse) as well as a birthday cake (obviously).

At some point, I had the bright idea of making a Stollen. I personally love Stollen, but acknowledge that in some households its right up there with bread sauce, brussel sprouts and Christmas pudding as something which is tolerated rather than enjoyed. It is also a cake which can often be found, half eaten, at the back of a cupboard sometime in April.

Making the Stollen was really good fun - like baking bread but without all the tedious hanging about. And rolling out the marzipan to create that perfect almondy circle at its epicentre was a challenge. The final stage was dredging it (I love that word!) with tons and tons of melted butter, brandy and icing sugar before wrapping it tightly and leaving it for the best part of a week. That last bit was torture. I'm far too greedy and impatient to bear such a lengthy period of 'resting', and couldn't resist prodding the thing every time I wandered into the kitchen. It was finally unveiled on Christmas day, and although everyone were suffering the groaning pains of over-indulgence , several generous slices were force fed at tea time.

The Stollen subsequently accompanied me on every visit to family and friends for the remainder of the holidays, a bit like a needy pet that couldn't be left alone, shrinking slightly every time.

I polished off the final dregs a few days later, accompanied by an indecently huge glass of Baileys. The main course of this last supper had been a stack of stilton, cranberry sauce, ham and cold red cabbage tottering precariously between two fat bits of bread. Heaven. But thank God Christmas only comes around once a year.
Posted by Urban Cakes at 02:26 No comments: