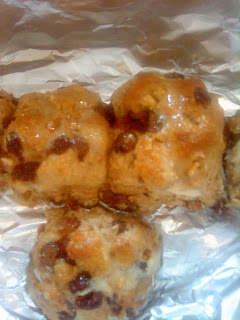 I've seen a recipe for an oat and cranberry loaf that I'm dying to try. But when?

There are certain baking endeavors that are so time-consuming, and demand such a level of constant attention that finding the time is a real challenge. One really does have to commit to a day spent, if not literally in the kitchen, in close enough proximity to return for kneading, prodding and just general staring-intently-at-the-dough purposes. Yeast-based products fall into this category, as does - in my case, at least - pastry.
Pastry is something of a thorn in my side; as much as I love the idea of a light and delicate crust enveloping some luscious filling, I make excuses to myself not to attempt it. This is largely due to the fact that whenever I've given it a go, the results have generally been underwhelming. And as much as I'm sure that if I 'praactise praactise praactise', as Vera-Ellen is urged to do repeatedly by her European dance teacher in the Stanley Donen musical 'On The Town', I never quite feel the inclination to waste precious baking time on a project that may well disappoint and frustrate.

I love to crash around in my kitchen making things, so when an opportunity arises to do so, I'd rather have fun than spend the time pondering why only half a pastry dish is covered, despite an almost OCD'ish attention to the detail of the recipe, and why the dough is the approximate thickness of a carpet rather than a dainty sliver. Quite recently I made a pear tart with a chocolate crumble topping - a delicious, sticky mess of a thing but definitely lacking the patisserie-style finesse that I was hoping for.

However, over Easter I made some heavenly hot cross buns, and on this occasion must admit that I actually relished the challenges that each stage presented - starting the night before with soaking the flour and yeast in stout with a myriad of spices. But they took all day. I confess: Eli missed his football training in the morning, and Caleb had to find his own way back from a party because I just couldn't tear myself away. I heartlessly put my own culinary needs before the social lives of my children. The result was worth the effort though - they were perfection (www.guardian.co.uk/lifeandstyle/stout-spiced-buns-dan-lepard). And admittedly the sense of achievement was immense (the dodgy mobile photo really doesn't do them justice, trust me.)

So with a bank holiday looming, maybe I'll give that loaf a go. What the hey - I've got nothing better to do, after all.

*With apologies to Julie Andrews.
Posted by Urban Cakes at 01:48 No comments:

Pretty as a picture? 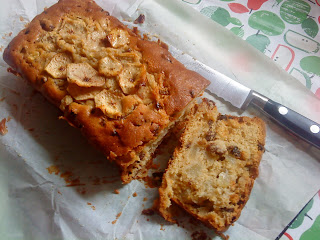 In common with many keen amateurs, I have a vast selection of cook books, and naturally favour those with an unapologetic emphasis on cakes and puddings. There are two or three perennials, and I also keep an extremely unruly folder of dog-eared recipes torn from magazines over the years. These wilting pages are probably the most often revisited, and the many buttery stains and splashes of barely mixed batter obscuring the type bear testament to this.
Luckily for me, many of my friends work in the magazine industry, and occasionally I receive a big jiffy bag of new books that they have thoughtfully wrestled from their freebie cupboards.

Being a creature of habit, it usually takes me a while to 'bed' the new books in, and quite often they'll be shelved and remain unopened until I can face the task of troweling through them. As I've mentioned elsewhere on these pages, I suffer badly from Choice Anxiety, and if I already have a backlog of recipes to try, I panic at the thought of adding more to my repertoire (I'm imagining that Woody Allen might suffer similarly if ever he took to the kitchen). However, when my beloved ex-Mother-in-law decided to pay us a visit I decided to branch out and see if I could find something suitable to try amongst the pages of the new tomes.
It is widely acknowledged that the enjoyment of food is a multi-sensory experience; the look, smell and feel of it is nearly as important as the way it tastes. But this fact is apparently something utterly lost on the food stylists responsible for the photography in a book entitled (rather perplexingly) Fresh Baked (what other kind of baked would it be? Stale? Passed its sell-by date?) The cover features a shot of three very anemic looking mini-sponges which are being drizzled on from a great height by a sickly looking yellow liquid that looks alarmingly like mayonnaise. I've never seen anything less appetising. Equally, all the pictures within feel almost apologetic; set against a spartan white background, and endlessly employing the technique of allowing the shot to go a wee bit out of focus at the edges, which looks more like someone nudged the photographer at a salient moment, rather than anything remotely artistic. There's something slightly WW2 about the whole thing - I almost expected tripe to make some random appearance. It transpired that the noctious looking yellow goo was in fact a passion-fruit cream, which sounds quite nice, but now that it's mayo in my head there's no rescuing it.
Undeterred, I felt vaguely excited by a recipe for a pear, cardamom and sultana cake, three winning ingredients in an irresistible combination. So I decided to give it a whirl. My only reservation was its use of self-raising flour which I just don't appreciate; mixing the raising agents with the flour at source is just plain sinister. But I'm grown-up enough to acknowledge that this is an irrational complaint, and I persisted anyway. The cake, despite its chillingly Presbyterian setting on the page, actually turned out very well. My more homey version is pictured above. Next time though, I'll ensure that the pears I use are a little over-ripe as it needs the naturally occurring sugar of the fruit to make it really more-ish.

PS. For an example of the way a cake should be represented in a recipe book - to induce immediate salivation and a trance-like march to the larder - I urge you to check out the chocolate genoise royale in the Baker & Spice book, Exceptional Cakes.
Posted by Urban Cakes at 07:47 2 comments: