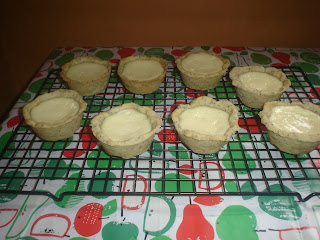 This post is little more than a thinly disguised cry for help to fellow bakers. Those perhaps who, unlike me, paid attention to the 'science bit' during their cookery classes, and are therefore much more knowledgeable on why certain extraordinary things occur when you bake a cake.
Happily, things rarely go wrong in the kitchen these days, but it always feels like its more by luck than judgment. I guess it's just an instinct thing; I feel my way around the process with a kind of bakers braille, relying on my senses to know when something needs to come out of the oven, or when enough mixing has taken place. However, why kneading dough in a particular way, or folding ingredients into a bowl rather than stirring them, or the ratio of baking powder to soda should affect the outcome remains a mystery to me. And as at school, if somebody starts to patiently explain the facts to me, my eyes glaze, I start to fidget and my brain effectively shuts down.

Ditto with cookery shows on TV. I'm rapt by the drama of a souffle sinking or a pudding failing to rise, but the minute an explanation is proffered, I drift away.

Generally, it's not a problem. I almost feel inclined to celebrate my ignorance and just enjoy Not Knowing The Answers, and not caring to know. Whilst knowledge and information are so easily accessed, it's kind of liberating to wallow in one's own daftness. I feel the same way about this as I do about faith and spirituality; As somebody wiser than me once said on the subject: 'All we know for certain about the existence of God and the afterlife is that we'll never know, and we should glory in that' (or something.).
Which segues perfectly into whether or not to put a finished cake in the fridge! For this is my dilemma. I have noticed recently - especially while I've been baking so very many cakes - that some can sit quite happily in the fridge for a day or two, and as long as they're allowed to rest at room temperature for an hour or so before cutting, they lose none of their texture or flavour. My healthy chocolate cake with mascarpone icing for example, can be made way ahead of time and might even be improved by its fridge gestation. Ottolenghi actually advocates chilling his apple cake wrapped in cling film for a couple of days before icing it, and Omari at work, who has commissioned two such cakes, reported back that he left his in the fridge and ate a slice a night for the best part of a week!

But the Coffee and ginger cake with pistachio icing was a disaster once chilled - it completely hardened, and never recovered. It actually tasted stale. When I made it again, I avoided the fridge completely and the difference was immense.

I've never put a banana bread in the fridge, or come to think of it, any of my loaf cakes. I was concerned that the Pear and cardamom loaf which was jammed full of very ripe fruit from my brother's pear tree, would suffer from being left for several days, wrapped in greaseproof paper in an airtight container. I imagined that the pears would all ferment, and that it would taste strangely medicinal, but it was delicious - better, in fact. Equally flapjacks and brownies benefit from a day or two of idleness before being scoffed.
Even I can surmise from the ingredients in these various offerings, that a certain theme emerges; Neither the chocolate or apple cakes contain butter, and I guess its the butter which is likely to harden up again in the fridge. But the chocolate custard muffins, and the little lemon tarts (pictured) - both crammed full of fat - survived in the cold without a hitch. So bang goes that theory.

So any hard and fast facts on the subject will be welcomed. Though I can't promise to stay awake whilst I try to disseminate the information.
And on the subject of instinct, I made a vegan cake last week (below), replacing some of the ingredients which I felt would make it taste too hippy-like, and deploying an icing recipe from another source entirely - it involved crushing fresh blackberries through a sieve and mixing the juice with icing sugar. I then spread the pulp over the top of the cake with a few whole fruits, gave it a dusting of sugar and it was glorious! This was something of an epiphany for me: not following a recipe slavishly and being satisfied with the results. Maybe it will signal the dawn of a new baking era - one where I am more maverick and carefree in my approach. Chilled out perhaps. 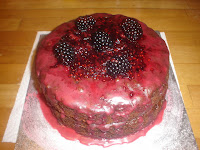 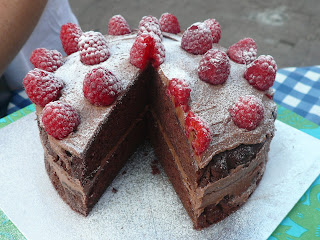 I liken my first experience of bona-fide cake-selling, to giving birth. At the time it felt like an endless, and very stressful, labour. But with a few days passed since I sold the last slice of apple cake on Saturday afternoon, I reflect on it all with misty affection and quite fancy doing it again!

Of course, the whole thing would have been a lot less arduous if it had been possible to suspend my other parental and day-job duties and just stay home and bake till it was all done. As it was, and with the inevitable intervention of the Rest Of My Life, I found myself icing chocolate cakes and slicing brownies at 3am for several nights on the trot, and was so sleep-deprived that I actually burst into tears during the baton-twirling task in Ultimate Big Brother. And it wasn't all about the baking; I also had to get my head around other perplexing issues, such as how to provide enough napkins, paper plates and forks without actually buying them. (I was virtually chased out of Wholefoods Market by a security guard after wandering back onto the high street with 50 serviettes stuffed into my bra), and how on earth I was going to transport everything in the boot of my car without it all hurling sideways. Oh, the perils of trying to set up a little cottage industry!

But nonetheless it happened, somewhat haphazardly, and it was good fun and also, as I had hoped, an incredibly useful exercise in what works, what doesn't and who buys cakes when they're wandering around a film festival getting sloshed on cheap red wine.

For the record, the Tahini flapjacks, Rye brownies and Honey and orange syrup cake all went quickly, as did the two lots of cookies (the Dark chocolate and sour cherry variety are pictured below). The cupcakes, which I included rather grudgingly, were ignored by the adults at the evening event, but sold out during the kids' screening (though I did discover that one little girl of about three, who returned to the stall several times, was systematically dropping them on the floor and stamping on them! I had to fight the urge to march into the cinema and demand that she sit on the naughty step until an apology had come forth. I think I'll have to seriously de-sensitise if I want to carry on with this selling lark). I also learnt the hard way that toiling over an admittedly lovely, but quite complex Blueberry and creme fraiche cupcake recipe is not a good use of time, as 3-year olds are unlikely to notice the difference.
The Light chocolate cake (pictured) went well, and was a great talking point due to its virtuous ingredients. And the Apple cake with maple icing was a slow-burning, word-of-mouth triumph - people were coming up to me asking for a slice long after I had sold out, having seen other satisfied punters roaming around with enraptured expressions on their faces. As I've said before, I take no credit for this. It's a wonderful recipe which really has the wow factor.
I'm doing it all again next weekend, and have already started to plan what I'm going to include for Round 2. Being a glutton for punishment, I don't intend to repeat anything! After all, where's the fun in that? So I'm going to make some little lemon and poppy-seed tarts that I've never tried before, and having trawled through my scruffy old recipe folder, have decided to revisit one of my absolute perennial favourites - a Cherry and polenta cake. Yum. I'm excited already. 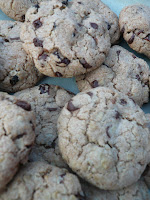