A sight for sore mince pies. 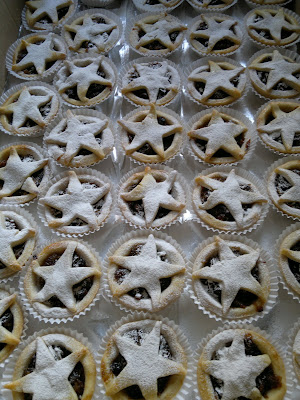 For the last few weeks, I've been providing cakes to a little cafe which resides in a lovely shop called Nomad Books in Fulham. This came about because my friend Jan - a great ambassador for Urban Cakes - was in there one day enjoying a very good cup of coffee, but with a pretty manky slice of carrot cake. She told them about me, so to cut a long story short (no bookshop pun intended), I've been shooting up there once a week laden with muffins, banana breads and flapjacks, and so far it seems to be going quite well.

The other day, they asked me if I could supply them with mince pies to give out at a book signing that they were hosting. Without hesitation I said I would, despite the fact that I've never actually made one in my life. Mince pies occupy the same space in my baking arsenal as cheesecakes; I make a decent cheesecake, but concede happily that there are plenty who do them better, not least the Jewish delis who are unsurpassed as far as I'm concerned. And if I'm really honest, a stodgy Mr Kipling mince pie - washed down with a little snifter of Baileys - is something of a guilty pleasure on Christmas Eve.

But I'm always up for a challenge, and wasn't about to let 50 of the buggers get the better of me. So after giving it some thought, I did what any self-respecting west Londoner would do faced with a similar dilemma: I called Eugene Manzi.

Eugene is the Godfather of the mince pie. He starts assembling the ingredients for the filling around July, and prepares the mince so early that it's positively humming by the time its unveiled in December. But the recipe is a closely guarded Manzi family secret and, despite years of cunning attempts to extract it , I have never succeeded in breaking him. Believe me, this mincemeat is sensational and worth the effort. Last Christmas, Eugene gave me a big jar of it, assuming that I'd put it to good use in various seasonal offerings, and of course I intended to do this. But in truth - and I'm not proud of this - I stood at the kitchen counter late one night (probably having blubbed through It's a Wonderful Life or some such) and shoved most of it in my gob using a very lady-like teaspoon, which somehow made it seem slightly less gluttonous. It's what generally happens when there's Ben & Jerry's in the house as well; I'll meander by the open freezer door, and delicately spoon little shards of the cold ice-cream into my mouth until there is none left. Which is why it is banned from my life forever. But enough of my sordid confessions.

Generously, and after after some very undignified begging on my part, Eugene agreed to give me a couple of jars as he felt that he just had time to prepare some more before the festivities commence. So with a new-found confidence, realising at the very least that the filling would be really good, I set about finding a recipe that would lend itself to the volume that I had to prepare.

I ended up resorting to my all-purpose pastry recipe - which only uses a tablespoon of icing sugar - as I feel that the filling is rich and sweet enough, and I made little stars of the lids. As you'll see from the snap, they really do look rather pretty. And it was actually a very useful exercise in pastry- making as I had to do several rounds, and found that the dough was better, more rollable and consistent with every batch (regular readers will know that pastry is my nemesis.)

As it turned out, there was way more mincemeat than was necessary, so I'm going to do a whole lot more of the little beauties for Eli's birthday party this weekend. I've sort of got the hang of it now, and am really looking forward to cranking up the mince pie conveyor belt again.

But no recipe to share this time, I'm afraid. Because if I gave it to you, I would have to kill you.
Posted by Urban Cakes at 07:02 No comments: