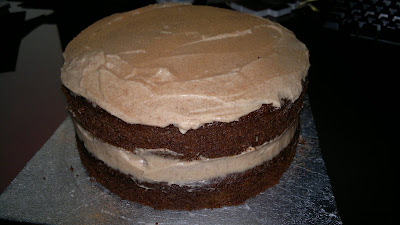 On February 13th, my older brother Paul died after battling cancer for 3 years. I'm not keen on words like 'battling' - there is very little option but to fight under those circumstances - and I have always objected to the expectation that anyone with a terminal illness is judged by how 'brave', 'courageous' and 'positive' they happen to be about the whole wretched business. If ever there were a justified reason for despair and self-pity it is surely this. But Paul was indeed all those affirmative things and more, and I miss him terribly.
As anyone who has experience of cancer will know, the illness itself and the toxic treatment used to control it, can have a horrible effect on digestion, appetite and the patients overall approach to food. Chemotherapy induces dreadful nausea and sickness, and mouth sores are common, making the simple act of eating an arduous and unpleasant chore.

This was especially harsh with my brother, because he absolutely loved food - the eating, the mealtime rituals, the need to recover afterwards! In fact, this applies to my whole family - not in a 'foodie' sense - occasions when we'd all get together were never spent discussing ingredients and comparing recipes (God forbid!) - I'm talking about something a lot less pretentious than that; Seaside fish & chips, Chinese takeaways, Christmas dinner, or even the unique pleasure of a bowl of salty tortillas and jumbo bags of Haribo's shared out whilst watching the Eurovision Song Contest!
Paul also loved my cakes. He was always the first to head to the kitchen at one of my kids birthday parties to see what I'd come up with, and would praise loudly if there was something that particularly impressed him.

It was therefore a lucky coincidence that the one thing that he was able to enjoy for longer than most other food, was cake. He could stomach sweet, stodgy puddings and buns and even craved them. I therefore became mildly obsessed with baking him different muffins and cookies every time I went to see him. I wanted to make stuff that he could manage but which would also provide some vaguely nutritious benefits too; so I would replace white flour with wholemeal, rye or buckwheat, add nuts and seeds wherever possible, use oil instead of butter and pack as much fruit in as was humanly possible.
You don't need to be a shrink to recognise that baking for Paul took on a greater, more symbolic significance for me than merely providing something for tea. Watching him become weaker, and feeling powerless to really do anything useful to help, I employed one of the only skills that I was capable of. And of course, being Jewish, the habit of throwing vast quantities of comfort food at a problem is both common and often pretty effective (our cousin Xanthe was tipping up with vats of chicken soup on a weekly basis). His ability to eat, and more importantly, his enjoyment, became a wider barometer for how he was feeling. He (and I) would be hugely buoyed if a muffin were wolfed down. I'd often give him half of one, and if the other half were requested, this was a considerable triumph. Conversely, it was heartbreaking if he were unable to get it down, even if he wanted to.

Two recent recipes that hit the spot were some deceptively virtuous blueberry bran muffins and a truly delicious wholemeal orange and apple cake from an old Nigel Slater book. He also loved some raspberry, white chocolate and cinammon blondie's made with rice flour and butternut squash, lifted from the same tome from which my favourite chocolate cake originated - incredibly moist and moreish. I remember him grumpily batting away his wife Vivi's hand when she tried to nick a bit off his plate - the last time I saw him do this I think.
The weekend after he died, I saw a recipe for a hemp and ginger cake with cinnamon icing (top photo). He would have loved it, so I made it anyway for Vivi and their girls and it was magnificent. An edible tribute.