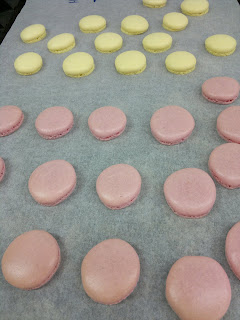 A few weeks ago I went on another cookery course, this time at Leiths and once again a present from my lovely friends.

I eschewed the classes that might have been more obvious for me; opportunities to practice some great classic cake recipes or further hone my pastry skills (though I'm still feeling slightly smug about my mince pie marathon over Christmas), and went instead for a masterclass in the fine - and frankly terrifying - art of Macaroons and Meringues. I had a pretty good idea that the steady hand, faultless judgement and overall finesse required to produce the dainty little circles would be extremely challenging for me, and force me, kicking and screaming, out of my comfort zone.

Now I should point out that I don't especially like those French macaroons - I admit that they're aesthetically pleasing, but they're somewhere up there with cupcakes in my pantheon of baked goods that represent something sinister and disingenuous. For me, a proper macaroon is one of those lovely, almondy cracked biscuits with a flimsy sliver of rice paper glued to their underside, and a single glazed almond pushed into their centre. My grandmother used to get them for us when we were kids, and they had the dubious distinction of being one of the few biscuits, other than Jaffa Cakes, that my sister would give a passing thought too (although she always ditched the nut).

But piled high in the window of Laduree on London's Burlington Arcade, in their candy shades of pink, green and yellow, I concede is an awesome sight.

I was concerned that this course might attract the kind of home baker who I have little in common with: Stepford-style mummies, who have been speed-balling on cupcake frosting for the last couple of years and are ready to move onto the hard stuff. Those competitive types, the scourge of the school cake-sale, who theme their kids' parties and probably spend hour upon hour piping Happy Birthday on to scraps of parchment (teeth clenched with the stress of it all) in various rainbow hues, to perfect their craft. In other words, women who make me feel hopelessly inadequate, especially in the icing department.

But I was pleasantly surprised that this wasn't the case, and to find myself partnered with a French guy called Herve, who turned out to be a very good person to work with, mainly because he was totally unflustered, very tidy and extremely magnanimous in sharing the glory of his perfect macaroons with me!

The day started with a demonstration from our tutor for the day - a reassuringly rotund patisserie chef, whose name I can't quite remember though it sounded like Wasabi. Now I love a good demo, and this one was great - I spent the whole time excitedly scribbling notes to myself like HUGE METAL SPOON! SMALLER BEATERS? DON'T OVERMIX!! Etc. Of course, reading it back later in the comparative calm of my own kitchen, it sounded more like the lyrics to a Joni Mitchell song, but I managed to remember most of the salient points.

For the macaroons, we were taught to use the Italian meringue method, which involves adding a boiling sugar syrup to the egg whites - this apparently helps the meringue to hold its shape, and keep longer before baking. This sturdy mixture is then folded into the almond paste and is ready for any personal touches that you might fancy; colouring (ours were yellow and raspberry pink), and a dab of flavour, such as rose water or framboise, or much more up my street - some coffee, chocolate or pistachio.

This is the point at which one is required to neatly pipe small circles of the mixture onto a prepared baking sheet - preferably marked in pencil to ensure perfect unity. Whilst Herve deftly filled his icing bag, I found myself having a full-scale battle with bag, spatula, scissors and icing nib. I issued so many very bad expletives during this exercise, that I thought I might be sent out of the room. And when I had finally regained some control and composure, I managed to pipe them all too closely therefore creating great long necklaces of pink meringue goo. The second tray was more successful and the finished result was actually pretty good for an early attempt.

We sandwiched our macaroons together with either raspberry buttercream or a really yummy passion-fruit curd, and I was delighted to bring mine home and show them off to family and friends. I even admitted humbly that Herve's were the more perfect yellow ones. Mine were - um - a little more rustic in appearance.

When I have another go at them - and I'm planning on it, soon - I'm going to try the ones in the Ottolenghi book, as the flavours sound so great, and they're not as poncey as some of their counterparts. But the recipe below is Lorraine Pascale's, as it was apparently a slightly altered version of this one that we did on the course. Good luck. You'll need it.