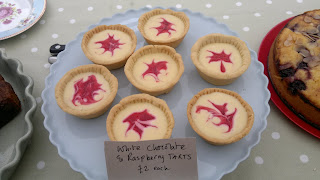 A few weeks ago, I took part in a London-wide scheme called Love Your Local Market, in which new businesses were offered market pitches at a reduced rate to promote their wares and get some useful experience and feedback. As I do indeed love my local market, which happens to be the one on Portobello Road, I applied and therefore found myself selling cakes along this hallow'd stretch, and then on Golborne Rd around the corner, a couple of days later.

This was a massively big deal for me because my association with this particular neighbourhood goes back a long way and has provided some of my most evocative memories, and enduring influences; I first discovered it aged about fourteen, when me and my best friend Abigail had become mildly obsessed with the 1950's (a standard teenage thing, I think. Were there ever more glamorous corpses than those of Marilyn Monroe and James Dean?) Brick Lane was fantastic for kitsch homeware - Flying Ducks and vases adorned with Miro-esque abstract patterns were in abundance. But nowhere beat Portobello's covered market under the Westway for Hawaiian shirts, dresses with cinched waists and huge skirts, and mad gold stillettos - not 'vintage' back then, merely second-hand. But the biggest lure was Mr Waxy's record stall - a mecca for anyone who, like me, loved Doo-wop, Phil Spector and vocal groups such as The Platters and Smoky Robinson and The Miracles. I got my original 7" copy of The Wanderers by Dion and The Belmonts there, together with many less illustrious (and cheaper) discs. A visit to Portobello always ended with a trip to Ceres (now the Grain Store) for a slice of wholewheat pizza sold off a stall on the street in front of the shop. Mr Waxy is of course long gone, but the place still has a strong pull on me, and the idea of trading there myself made me feel quite misty-eyed.

With little time to prepare (I was only given my dates a week or so before-hand), I needed to get myself organised. I frantically ordered brown paper bags and cake boxes off the internet, and much to my tremendous delight, became the proud owner of an Urban Cakes stamp. Anyone of my generation will remember the unique joy of the toy post office set: I think this is where my love of stamping things probably started. My sister Joanna reminded me recently that we also created our own library at home, putting cards in the front of all our book

s and stamping the date on them when they were returned (presumably by us, to us!) Miniature shop sets were also a joy - tiny plastic replicas of Heinz baked beans and Birds custard, with the authentic packaging. It seems that it was perfectly acceptable in those childhood days, to have no loftier a career plan than to be a shop-keeper, bus conductor, or someone who worked in a post office.

I'm not proud to admit that I became somewhat territorial with my Urban Cakes stamp, bristling with irritation when the kids asked for a turn, and snapping that they had applied too much pressure, or not enough. 'I want it grainy, I want it grainy!'. I was clearly the only person who could achieve the required inky perfection.

So having got my stationery sorted, I turned my thoughts to the cakes themselves. It would have been churlish not to include a lemon drizzle, or Tahini flapjacks. Due to their popularity in various cafe's, these seem to have become my signature products, along with banana bread. However, I fancied making that droolsome squash cake with honey and orange syrup instead of the banana bread (I've overdosed on them lately), and added to these staples my new favourite brownies - made with nearly-burnt butter and cocoa, a chocolate cake adorned with summer fruit, some gluten-free walnut cookies, a cherry and polenta tart (I've eulogised about this in previous entries, I'm sure), a batch of buttery blueberry crumble muffins, and some savoury ones, in case anyone happened to be passing by around lunchtime. Best of all, a small but perfectly formed tray of white chocolate raspberry tarts (pictured above). This array necessitated many hours standing in the kitchen, stooping over bowls and peering into ovens, and my back and neck really felt it. No wonder chefs are so grumpy.

The whole thing was an invaluable lesson, I have to say. The weather was hideous (don't even get me started on this so-called summer), and as someone who has managed to avoid camping for most of their life, attempting to cover my stall, single-handedly, with a hired tarpaulin under the rueful gaze of several other not-terribly-helpful market traders, was not a high point. The endless rain meant that there weren't many people out just wandering around. And I've honestly given up trying to second-guess what customers are actually going to buy, as there has been very little consistency with any of the events where I've sold cakes. But I can more or less guarantee that I'll be out of chocolate cake by the end of the day wherever I happen to be, which proves something I guess about the allure of it. And I had pretty much sold out of everything by the end of the second day, though I have to admit that my sales were enhanced by the generosity of various friends and family who came down to show their support (and were good-humoured about my refusal to provide a discount.) I was struck by how polite tourists are (several came back in order to tell me how much they had enjoyed their purchases) and how cake, in all its spongy, sugary, moist glory, can herald the most interesting of conversations. Well, to me anyway.

Quite a few north Kensington locals seemed to approve, and inquired about the likelihood of Urban Cakes becoming a permanent fixture. I'm hoping so, because a bit like giving birth, when you insist (using many expletives) that you will never EVER put yourself through such an ordeal again, moments later you are idly wondering when you can repeat the experience because it really wasn't that bad, was it?
Posted by Urban Cakes at 07:20